As promised, this week, I’m going to tell you about West Virginian monsters/beasts.  And no, I’m still not including Mothman!  If you want to learn about that guy, I encourage you and Mister Google to get together for that one.  It’s good, but it’s a bit too famous for this blog series.

Referencing the works of Ruth Ann Musick again, I can see that The Telltale Lilac Bush has it’s very own chapter called “Weird Creatures.”  Included in the “Omens of Death” chapter is a story called “Shiny Eyes” that is also about people spotting a creature outside of nature, and is one of my favorites, about a creature lurking around a coal mine.

Monsters are so very different from other paranormal sightings and tales.  To quote the preamble from the “Weird Creatures” chapter:

“The creatures in these stories are difficult to identify or explain.  Unlike ordinary ghosts, which have some kind of rationale, creatures seem to have no connection with the real world.  They sometimes resemble real animals, but are never quite like them, and frequently they are seen as fearful and destructive, though the human beings that they attack always manage to escape somehow.  Nothing apparently affects them, not even silver bullets.  The very mystery about these creatures may be the reason for their appeal.”  Ruth Ann Musick, The Telltale Lilac Bush.

But I digress.  West Virginia has a full compliment of monsters lurking in the thick woods, chasing cars and really scaring the bejeezus out of people. 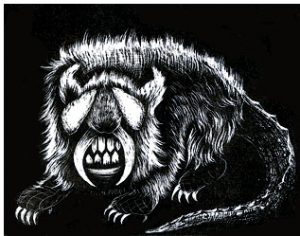 This is a picture from The Telltale Lilac Bush.  It accompanies a story called “The White Thing” which is more commonly called Sheepsquatch.  Yeah, you read that right.  The person in charge of giving rural monsters kickass names was on vacation when Sheepsquatch came about.  If we can get away from the ridiculous name, Sheepsquatch has quite a wealth of sightings to it, particularly in the 1990s.  Even someone out researching Mothman had a Sheepsquatch sighting!  This is a giant bipedal monster with dirty white fur and horns, and instead of front paws it boasts articulate hands very much like a raccoon.  Sheepsquatch is sometimes aggressive and sometimes not.  Either way, it’s size and strangeness seems to leave an impression.

One of my favorite monster tales from childhood is that of Tailypo.  Now, this one is not necessarily West Virginian.  It’s an old Southern tale that seems more rooted in Tennessee than my home state, but I heard it as a child nonetheless.  You can read the yarn here.

West Virginia has Sasquatch, like the Grafton Monster, it has creepy dog-like animals lurking near Harper’s Ferry called Snarly Yow, it has extraterrestrial sightings in Flatwoods, heck, there have even been chupacabra sightings!

My favorites are the ones like Tailypo and Shiny Eyes.  The strange-looking ones that roam those thick woods where the sun never seems to reach the ground, the ones that frighten the pants off of seasoned outdoorsmen and leave tales behind that outlive the eyewitnesses.  More than once in my teenage years, my friends and I would be driving the single-lane dirt roads of the deep hollows and the complete isolation and dark would always bring to mind these stories of things just past the tree line watching and waiting.

It was and still is unsettling.

Thanks for stopping by!  If you’re new, you can go back and check out the previous two posts in this series and next week we’ll tackle cemeteries!

I don’t remember hearing any tales like this in my youth. Then again, I mostly grew up in Austin, TX. I guess bigger cities lack the privacy a beastie needs to garner popularity.