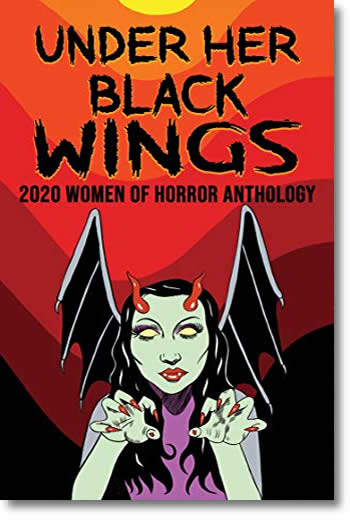 Under Her Black Wings: 2020 Women of Horror Anthology

– A glamorous actress whose very flesh is reanimated by a beloved Hollywood icon
– A Boy Scout troop encounters a frightening mythological creature in an American forest
– A lonely woman finds a home among a group of lost-and-found souls, all cared for by a tentacled sea-creature called “Mother”
– A faceless woman attacks like a virus and takes on the identities of her victims
– A post-apocalyptic battle for survival rages between human and insect
– A shadow woman leads the spirits of the murdered to take revenge in the desert

These are just some of the stories nineteen women came up with when tasked with creating their own Women Monsters. Step inside and experience tales of bloodsucking entities in the jungles of Southeast Asia, Cuban river goddesses, an Aztec bruja, werewolves, soulstealers, obsessive lovers, furious spurned wives, bloody murder in Gothic manors and on Southern plantations, and so much more…

Copyright © 2021 Somer Canon - All Rights Reserved.
Contents of this site including text and media may not be reproduced without prior written consent.